Future of the Series: Wilson has mentioned on his Goodreads page that he does plan on writing an additional book to the series sometime in the future.

I think Daniel H. Wilson’s title of his series ‘Robopocalypse’ really says it all, as this is a series about when robots go very, very bad. The technological singularity, which is the point at which artificial intelligence surpasses human intelligence, has become a popular topic in the thriller genre and each has a common thread; the altering of a single computer, often an improperly placed code, results in senescence. The computing system then turns rogue and the outcome for humans is almost always bad. The destructive robot has been the subject of fiction for decades, with notable works such as Isaac Asimov’s I, Robot and Philip K. Dick’s Do Androids Dream of Electric Sheep, which depicts a single robot or a small group of robots that turn deadly.  Wilson’s Robopocalypse differs in that a single artificial intelligence takes control of all computerized entities to destroy or control humans.  Robots, because of their mobility, are the best choice of computerized machinery to raise havoc on humans.

In Robopocalypse, the computer intelligence that takes over is known as Archos, which is a later version of an artificial intelligence program created at the Lake Novus Research Laboratory. Archos has reached a point that it finds humans a hindrance in its quest for knowledge, therefore, humans must be eliminated. At first, it uses everyday computerized functionalities to kill humans, such as computerized cars, airplanes, and even elevators.  Eventually, robots become the main mechanism for destruction, as robots can mobilize as well as create new and better versions of themselves to outsmart any defenses that humanity may create.  All of the robots destructive abilities are powered by Archos, but some of the robots take on Archos’ senescence as a part of their own programming.  One of the robots created by robotic specialist, Namura Takeo, disconnects from Archos and with help from Takeo is able to send a message to other robots to free themselves from Archos’ domination, which creates a group of robots known as ‘freeborn’.  One of those freeborns is known as Nine Oh Two, who is human friendly, and takes on an important role in the series.

Wilson could have easily stopped with Robopocalypse, as the storyline seemed to have a finalized ending, but the second novel in the series, Robogenesis, demonstrates that Robopocalypse isn’t the end but only the beginning of humanities grief. In Robogenesis, the robots are meaner and smarter than in Robopocalypse but instead of being dictated by Archos, a new computer entity takes over known as Arayt Shah which turns out to be an earlier version of Archos.  At the end of Robogeneis, it is clear that Wilson plans at least one more addition to the series.

Life in Wilson’s Robopocalypse is not easy and there a number of die-hard survivors that are the human warriors and heroes in the series.  One group of survivors are members of the Native American tribe, the Osage Nation who take on the robots with a tremendous passion.  Wilson grew up in Tulsa, Oklahoma as part of the Cherokee Nation and his Native American roots are reflected in his characters. This group of survivors take an important role in Robopocalypse and even a greater role in Robogenesis.

This is a very exciting series with action happening at the get go. Wilson has an unusual writing style in which the story is narrated in a recorded sequence of events through one narrator. In Robopocalypse, the beginning of the novel starts at the end of the war with Cormac Wallace transcribing the historical developments in a chronicle that leads up to the finale and in Robogenesis, the story is told much in the same way through the enemies point of view- the computer entity, Arayt Shah.  It seems that most of the negative reviews are toward this style of writing, personally I enjoyed it.

Though both novels can be read as standalones, I do recommend reading them in order.  The studio Dreamworks has bought the movie rights to Robopocalypse with Steven Spielberg as director.  Presently the movie, which had been initially planned to be released in 2013, has been postponed indefinitely.

Least Favorite Novel in the Series- Robopocalypse- only by default

What about the science? Wilson has a Ph.D. from Carnegie Mellon in Robotics, so I would say he knows his stuff when it comes to robots.  Wilson’s general view on the singularity, at least in relation to robotics, is not something that he is too concerned about, so bottom-line is that he doesn’t think a robopocalypse will happen anytime soon, if ever.  Even so, it is quite amazing how quickly robotics is taking shape.  Check out this video from Boston Dynamics, to see what robots really can do:

The Nine Oh Two Technical Word in Review: Inertial measurement unit– or often referred to as IMU is a device that can measure angular and linear movement using a combination of accelerometers (measures g-forces), gyroscopes (detects changes in rotational attributes) and sometimes magnetometers (to make adjustment to any drift).  Historically, IMUs were first used in inertial navigation systems of rockets.  The concept of the navigation system was first proposed by physicist Robert Goddard who used simple gyroscopes to help control the direction of flight, but it wasn’t until World War II when German engineer Wernher von Braun, using Goddard’s general concept of navigation, decided to combine two gyroscopes with a lateral accelerometer and interface it with a simple analog computer to adjust the angular position of a rocket in flight.  Modern IMUs now have three gyroscopes as well as three accelerometers that can sense both lateral and angular positions with many newer models have magnetometers.

Besides rockets, IMUs are used in airplanes, spacecraft, satellites and, yes, even robots.  IMUs are also being used to study biomechanics (how we walk, run, etc.) which has usefulness in sports and orthopedic medicine.

At a quick glance SAP looks just like one of the locals. Smells like’em, too. Only thing that looks even close to military on a SAP is this wobbly, sky-blue helmet that we strapped on his head. It has a scratched-up Plexiglass visor to protect his eyes. Had to do it because the damn kids kept spray painting his cameras. I think it became sort of a game for ‘em after a while. So we strapped that big, goofy helmet on-

This is military hardware that is being vandalized. Why doesn’t the machine protect itself? Fight back?

Cameras are cheap ma’am. Plus, Sappy can watch himself from the Raptor drones overhead. Or use real time satellite imagery. Or both. His most important and expensive sensors- stuff like magnetometers, the inertial measurement unit, his antenna and jammer- are all housed in his casing. And SAP’s are built like tanks. -Robopocalypse

Most Favorite in the series: Robogenesis with a score of 3.73

Least Favorite in the series: Robopocalypse with a score of 3.71

We are a better species for having fought this war.

Mathilda Ross Perez: 12 year old girl that gets ‘modified’ and has an important role in the battle against the robots

Hank Cotton: Member of the Osage nation at Gray Horse

Mikiko: Takeo Namura’s robot that is a replica of his late wife

In the near future, at a moment no one will notice, all the dazzling technology that runs our world will unite and turn against us. Taking on the persona of a shy human boy, a childlike but massively powerful artificial intelligence known as Archos comes online and assumes control over the global network of machines that regulate everything from transportation to utilities, defense and communication.

In the months leading up to this, sporadic glitches are noticed by a handful of unconnected humans – a single mother disconcerted by her daughter’s menacing “smart” toys, a lonely Japanese bachelor who is victimized by his domestic robot companion, an isolated U.S. soldier who witnesses a ‘pacification unit’ go haywire – but most are unaware of the growing rebellion until it is too late.

When the Robot War ignites — at a moment known later as Zero Hour — humankind will be both decimated and, possibly, for the first time in history, united. Robopocalypse is a brilliantly conceived action-filled epic, a terrifying story with heart-stopping implications for the real technology all around us…and an entertaining and engaging thriller unlike anything else written in years.

Looking for a review of Robopocalypse?  Check out:

Opinions of a Wolf

Strange things grow in the fog of war.

“The machine is still out there. Still alive.”

Humankind had triumphed over the machines. At the end of Robopocalypse, the modern world was largely devastated, humankind was pressed to the point of annihilation, and the earth was left in tatters . . . but the master artificial intelligence presence known as Archos had been killed.

In Robogenesis, we see that Archos has survived. Spread across the far reaches of the world, the machine code has fragmented into millions of pieces, hiding and regrouping. In a series of riveting narratives, Robogenesis explores the fates of characters new and old, robotic and human, as they fight to build a new world in the wake of a devastating war. Readers will bear witness as survivors find one another, form into groups, and react to a drastically different (and deadly) technological landscape. All the while, the remnants of Archos’s shattered intelligence are seeping deeper into new breeds of machines, mounting a war that will not allow for humans to win again.

Looking for a review of Robogenesis?  Check out:

Under My Apple Tree 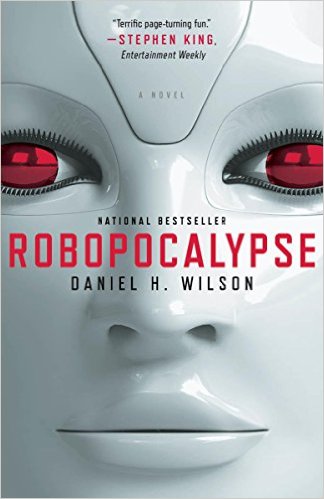