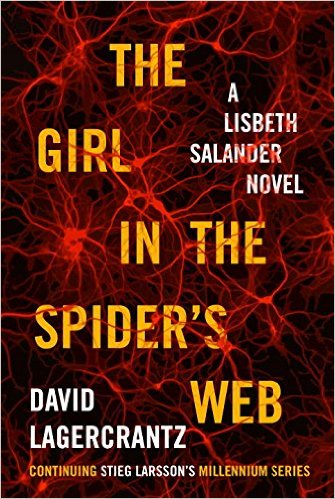 The focus of my blog is to review book series and not individual novels, but writers are going to continue writing novels within a series even after I have done my review, so I plan on reviewing the individual novels as they come into circulation.   David Lagercrantz has just recently added book #4, The Girl in the Spider’s Nest, to the Millennium series.

This is one review that I didn’t think I would be doing. Stieg Larsson, the creator of the Millennium series, died from a heart attack in 2004 shortly before the Millennium series was published, so Larsson never did see the success of his novels. This success resulted in a huge windfall, and since Larsson did not write a legal will, the royalties went to his brother and father. Larsson’s long-time live-in partner, Eva Gabrielsson, gained nothing from Larsson’s success except that she claims that she has the partially written novel of what would have been the fourth addition to the series. Since she has no rights to Larsson franchise, it is doubtful that we will ever see it published. So it seemed that the Millennium series ended with death of its creator, however, that has turned out to not be the case.

In 2013, the Larsson estate decided that author David Lagercrantz, a well-known writer in his native Sweden, would write the next installment to the series. Of course, this has created a whirlwind of controversy, and accusations toward the Larsson’s estate of taking financial advantage of Stieg Larsson’s legacy. This, of course, has brought Lagercrantz to the limelight, and with it a certain pressure to prove that he can put out a novel that wouldn’t bring shame to the Millennium series. The critics are now writing and the critiques are coming in and overall the reviews, not surprisingly, have been mixed.

There has been a lot of speculation on why the series has been so successful, and some would say that it’s Larsson’s depiction of violence against women, and others say its complexity as a crime thriller, but what I really think made this series so successful is the character Lisbeth Salander. Salander is an unusual superhero because as a women she is not especially knock down gorgeous, in fact, she does everything to conceal her beauty by wearing tattoos and body piercings as well as dressing in an attire that is gothic. She is an exclusive introvert with a personality that is brusque and surly. She doesn’t have any particular superpowers with the exception that she is a brilliant computer hacker and therein lies her power. So Lisbeth Salander is the David versus Goliath, the underdog that can bring down an empire with just the stroke of a key. It is this character that makes Larsson’s series stand out.

So did Lagercrantz do justice to the Millennium Series? Well, I would say he didn’t tarnish the series and upheld the concept that Lisbeth Salander is a superhero and, in fact, even enforces that image. Lagercrantz worked hard to include many of the characters from the earlier novels while at the same time creating some of his own. Though Lagercrantz tried to stay with same writing style to that of Larsson, he did add a subtle touch of his own style. Lagercrantz did tone down much of the graphic violence and gratuitous sex that was a hallmark of the previous novels, which I am sure will please a number of readers. Lagercrantz also did not go into the intricate details in the character’s more mundane activities that Larsson is well known for, such as what Blomkvist and Salander were having for dinner.

The basic premise of the story revolves around Frans Balder, a computer scientist that is well known for his work on artificial intelligence. Balder is murdered which was witnessed by his autistic son, but before this happened, Balder contacted Mikael Blomkvist stating that he had something important that he wanted to reveal. Blomkvist, of course, sees this as perhaps the next big story for the failing Millennium magazine which means he becomes involved in a life and death investigation. Because of Balder’s highly sophisticated research with computers, Blomkvist realizes that technically this is way out of his league, so he contacts Salander, who already seems to have some interaction previously with Balder and the story goes from there.

The general story for the most part is interesting, however, I did have some issues with the more technological aspects of the novel. Lagercrantz introduces the readers to the concept of the ‘technological singularity’ by portraying Frans Balder as a scientist who creates a program that would meet the singularity and unfortunately Lagercrantz does a relatively poor job of explaining it. The technological singularity is believed by scientists to be the point at which technology surpasses human intelligence. There is considerable debate on what will happen when the singularity is met, some say it maybe the end of mankind while others think that its impact is way overblown. Lagercrantz explanation is confusing especially when he throws in a wholly different concept known as the gravitational singularity which is found at the center of a black hole and has nothing to do with computer science or technology. I am not sure at why it was even discussed. Lagercrantz also made any discussion on mathematics just confusing which I believe may be on purpose, since I am sure he doesn’t understand any of the concepts so why not just confuse the reader as well.

Overall, I enjoyed the story and I like Lisbeth Salander, so I hope the series continues.  There is an interesting discussion on the savant syndrome in autistic children and Lagercrantz picks on the US National Security Agency (NSA), which has become the punching bag for a lot of thrillers these days, not that they don’t deserve it.  Anyways, just a whole lot of fun.

To learn more about the series check out Stieg Larsson and David Lagercrantz Millennium Series.