Gina Mazzio, RN, is on the brink of getting married when a childhood friend relocates from the Bronx to San Francisco. Within days, Gina’s nurse friend is relating difficult-to-believe horror stories about her new employer, a cardiologist whom she suspects is involved in illicit and deadly medical practices.

Gina soon discovers the stories are true—the doctor is not only acting in an unethical manner, he may also be complicit in two or three hideous murders. That knowledge quickly makes her the new target of the doctor and a vicious hit man, who is determined to hunt her down and kill her.

Dramatic changes are on the horizon for Eve and Joe Quinn and their relationship may never be the same. Faced with the task of protecting Cara Delaney, a young girl with ruthless enemies who want to see her dead, Eve takes her away to the remote Scottish Highlands where they join Jane MacGuire in search of a hidden treasure. But nowhere is far enough away to protect Cara from danger. With enemies closing in from all sides, Hide Away is a high-octane thriller that fans will not want to miss.

Wesley Chu’s The Days of Tao

A World of Tao Novella

Cameron Tan wouldn’t have even been in Greece if he hadn’t gotten a ‘D’ in Art History.

Instead of spending the summer after college completing his training as a Prophus operative, he’s doing a study abroad program in Greece, enjoying a normal life—spending time with friends and getting teased about his crush on a classmate.

Then the emergency notification comes in: a Prophus agent with vital information needs immediate extraction, and Cameron is the only agent on the ground, responsible for getting the other agent and data out of the country. The Prophus are relying on him to uncomplicate things.

Iris Johansen’s third book in her latest explosive trilogy starring forensic sculptor Eve Duncan takes readers on a high-energy adventure with Eve fighting to overcome the odds. Protecting Cara Delaney from the enemies who want her dead leads Eve to be their target. It will take everything she has to rescue Cara, and doing so will put that which is dearest to her at risk. Night and Day is the pulse-pounding race to a conclusion that will have readers on the edge of their seats.

Wesley Chu’s The Rise of Io

Ella Patel – thief, con-artist and smuggler – is in the wrong place at the wrong time. One night, on the border of a demilitarized zone run by the body-swapping alien invaders, she happens upon a man and woman being chased by a group of assailants. The man freezes, leaving the woman to fight off five attackers at once, before succumbing. As she dies, to both Ella and the man’s surprise, the sparkling light that rises from the woman enters Ella, instead of the man. She soon realizes she’s been inhabited by Io, a low-ranking Quasing who was involved in some of the worst decisions in history. Now Ella must now help the alien presence to complete her mission and investigate a rash of murders in the border states that maintain the frail peace.

With the Prophus assigned to help her seemingly wanting to stab her in the back, and the enemy Genjix hunting her, Ella must also deal with Io’s annoying inferiority complex. To top it all off, Ella thinks the damn alien voice in her head is trying to get her killed. And if you can’t trust the voices in your head, who can you trust?

Forensic anthropologist Bill Brockton has spent twenty-five years solving brutal murders—but none so bizarre and merciless as his latest case: A ravaged set of skeletal remains is found chained to a tree on a remote mountainside. As Brockton and his assistant Miranda dig deeper, they uncover warning signs of a deadly eruption of hatred and violence.

But the shocking case is only the beginning of Brockton’s trials. Mid-case, the unthinkable happens: The deadliest criminal Brockton has ever foiled—the sadistic serial killer Nick Satterfield—escapes from prison, bent on vengeance.

But simply killing Brockton isn’t enough. Satterfield wants to make him suffer first, by destroying everything he holds dear: Brockton’s son, daughter-in-law, grandsons; even Miranda, his longtime graduate assistant, now on the verge of completing her Ph.D. and launching a forensic career of her own.

The dangers from all directions force Brockton to question two things on which he’s based his entire career—the justice system, and the quality of mercy—and to wonder: can the two co-exist?

If not, which will Brockton choose in his ultimate moment of truth?

A.D. Garrett’s The Truth Will Out

A Simms and Fennimore Novel

North Korea has one of the world’s largest standing armies, capable of unleashing a massive arsenal of chemical and nuclear weapons. With an unstable government, under absolute dictator Kim Jong-un, North Korea more closely resembles an organized crime ring than a real nation-state. Millions live on the edge of starvation while Pyongyang’s ruthless generals, crooked bureaucrats, and vicious secret police wage a covert war against each other to expand their rival fiefdoms. RED PHOENIX BURNING explores the implosion of this corrupt regime – a coup that triggers a bloody civil war among the North’s brutal factions. The world is dragged into a violent and rapidly widening confrontation amid North Korea’s shattered ruins, bringing it to the edge of an all-out war that could engulf the entire civilized world.

Fans of the original Red Phoenix will be delighted to see favorite characters like Colonel Kevin Little, Brigadier General Tony Christopher, and Colonel Rhee Han-Gil returning to battle, older and wiser, alongside new cast of heroes and villains. Red Phoenix Burning will also offer readers a deeper look behind today’s headlines of turmoil and uncertainty—a look made all the more profound by the in-depth knowledge of war, military technology, and geopolitics brought to bear by Larry Bond and his co-authors.

Amelia Sachs is hot on the trail of a killer. She’s chasing him through a department store in Brooklyn when an escalator malfunctions. The stairs give way, with one man horribly mangled by the gears. Sachs is forced to let her quarry escape as she jumps in to try to help save the victim. She and famed forensic detective Lincoln Rhyme soon learn, however, that the incident may not be an accident at all, but the first in a series of intentional attacks. They find themselves up against one of their most formidable opponents ever: a brilliant killer who turns common products into murder weapons. As the body count threatens to grow, Sachs and Rhyme must race against the clock to unmask his identity–and discover his mission–before more people die.

The British Army left Iraq in 2009 after a six-year campaign alongside coalition forces. What they left behind has remained a closely guarded secret – until now.

Royal Engineer EOD operator Dan Taylor is on his last tour of duty when he is caught up in a conspiracy that will have consequences reaching far beyond the country’s war-torn borders.

With no choice but to follow orders, Dan realises that the legacy he and his commanding officer leave behind will have an unimaginable impact on the future of Iraq, and that of the British secret service.

But first, he has to survive the mission.

The Skeleton Detective is back.

A cold case dating from the 1960s draws forensic anthropologist Gideon Oliver to the Channel Islands decades later to shine a light on the mysterious connection between two men who died there on the same night.

Swapped as young boys by their fathers during the Nazi occupation, wealthy Roddy Carlisle and middle-class George Skinner had some readjusting to do after the war ended—but their lives remained linked through work, trouble with the law, and finally, it would seem, through murder.

Nobody expects that Gideon’s modern-day investigation will turn up fresh bodies. But old bones tell many tales, and the Skeleton Detective has to be at his sharpest to piece together the truth before the body count mounts still higher. 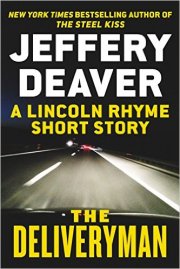 A man is murdered in a back alley. Renowned forensic detective Lincoln Rhyme and his partner Amelia Sachs are left with a veritable mountain of evidence collected from the trash-filled alley, and their only lead is a young eyewitness: the man’s eight-year-old son, who was riding along on his father’s delivery route.

But the murder victim may have been more than just a simple deliveryman. Rhyme and Sachs uncover clues that he might have been delivering a highly illegal, contraband shipment–which is now missing. And someone wants it back…

A series of strange events throws the world into turmoil. As a manned Chinese rocket explodes upon launch, three American astronauts, each separated by thousands of miles, are murdered. Then an archaeologist in Croatia uncovers a new cavern system that reveals elaborate primitive paintings by a tribe of Neanderthals. The artwork, painted in blood, illustrates an immense battle between the Neanderthals—joined by Homo sapiens—and frightening shadowy figures.

Who is the ancient enemy depicted and what does it mean? The search for answers will take Commander Gray Pierce of Sigma Force 50,000 years back in time. As he and Sigma trace the evolution of human intelligence back to its true source, they will be plunged into a war for the future of humanity that stretches across the globe . . . and beyond.

From ancient tunnels in Ecuador that span the breadth of South America to a millennia-old necropolis holding the bones of our ancestors, from the lost archives tied to the sunken continent of Atlantis to the first moon landing, Sigma embarks on its most harrowing journey ever—and faces off against its greatest threat: an ancient evil, resurrected by modern genetic science, strong enough to bring about the end of man’s dominance on this planet.

Only this time, Sigma will falter—and the world we know will change forever.

Ukraine is only the opening gambit, so far as the Russian President is concerned. With his sights set on expansion and undeterred by the prospect of a new Cold War, he intends to shift Russia’s economic focus towards the East in order to shield the country from the reprisals that his next move is sure to provoke. The President delegates to his Prime Minister the redeployment of Russia’s vast energy resources, a vital component of his strategy. But when this plan tilts off-course, it threatens to spread the current conflagration in the Middle East right up to Russia’s own borders. Against a background of political corruption, state-sponsored terrorism and increased Taliban insurgency, the President turns to independent troubleshooter ALEX LEKSIN whose investigations take him from Moscow into one of the world’s most sinister countries, right at the heart of Central Asia.