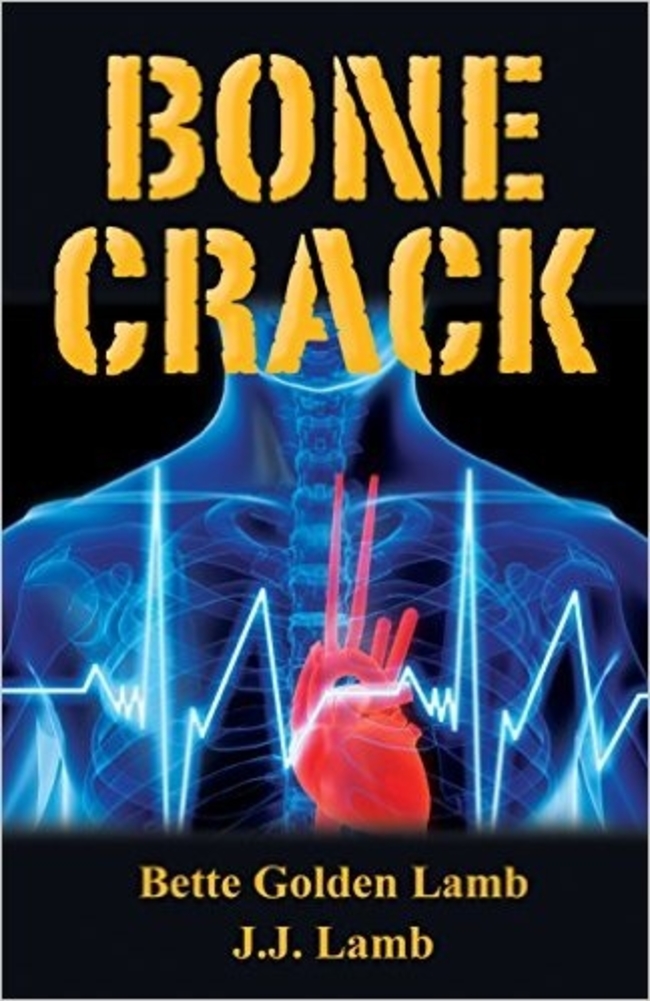 The focus of my blog is to review book series and not individual novels, but writers are going to continue writing novels within a series even after I have done my review, so I plan on reviewing the individual novels as they come into circulation.   Bette Golden Lamb and J.J. Lamb have just recently added book #6, Bone Crack, to the Gina Mazzio series.

Gina Mazzio, our gutsy nurse from the Bronx, has once again found herself in the midst of a spree of murders at San Francisco’s Ridgewood Hospital. Our bad boy is cardiologist Morton Tallent, who seems to have ignored taking the Hippocratic Oath by using a hit man to take out people that have proved to be an inconvenience for him, which also includes Mazzio. His hit man, Vlad Folo, is a jewel of a person who not only kills his victims, but tortures and rapes them as well.

Having read every book in the Gina Mazzio series, I have found that the Lambs have proved to be worthy authors of a first class medical thriller series with each successive book getting better as the series progresses, but I feel that Bone Crack has somewhat missed the mark as it doesn’t quite live up to the standards that I have seen from the other books in the series.  My biggest problem with Bone Crack is the portrayal of the evil doers, Tallent and Folo.  Both characters are despicable as one would expect for serial killers, but the Lambs seem to want to create a certain amount of empathy for these characters by depicting them as victims and their victimization is what molded them into the disgusting creatures that they have become. Folo was victimized when, as a child, he witnessed the brutal murder of his parents by members of the Russian mafia. The members of the mafia gang were also ordered to eliminate Folo, but he managed to escape only with the knowledge that one day he would be found and murdered.  Folo’s response to the torture, rape, and murder of his mother was not to seek vengeance on the perpetrators, but instead mimic their actions by attacking innocent victims, which mind you, doesn’t make me feel a whole lot of empathy for him.

Tallent had even a better reason to become the slime ball that he’s become, as his parents forced him to become a physician against his will when he instead really wanted to become a professional surfer dude.  That’s right, you heard me, Tallent wanted to be a professional surfer, and because he was forced into becoming a cardiologist, he decided to ream the medical system for all its worth to make him a wealthy man and kill anyone that stood in his way. Now if his parents forced him into being the guy that picks up road kill, perhaps I could understand, but a physician? Geeezzz! I am not sure if the Lambs are messing with my mind with this character or if they really feel that Tallent is a fallen angel. I also felt that there was no appropriate retribution for both Tallent and Folo, which made for a disappointing ending.

On the bright side, Mazzio is one step closer to marrying Harry Lucke, which I think many fans of the series will appreciate.  Additionally, they also bring to light the unsavory practices by some physicians of ordering unnecessary and potentially dangerous diagnostic testing on patients in order to make more money.

Bone Crack is a so-so read, but I know that the Lambs can do better, so I will be back when the next Gina Mazzio book comes out, and maybe we will be hearing wedding bells.

To learn more about the series check out a review of the Gina Mazzio Series.