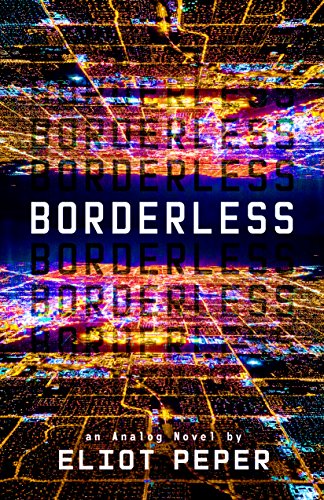 The focus of my blog is to review book series and not individual novels. But writers are going to continue writing novels within a series even after I have done my review, so I plan on reviewing the individual novels as they come into circulation.  Eliot Peper has recently added book #2, Borderless, to the Analog series.

When I was a little girl my first exposure to TV was in black and white, then one day my dad brought home a color TV. WOW, I thought it was the greatest thing on Earth. When cell phones came out, I thought I would never need one, but then I finally got one I wondered how I got by without it. We are in the era of a technological revolution and when the latest new technology comes out, there are plenty of people who are the first in line to get it. With such a demand and the prize potentially being in the billions of dollars, entrepreneurs are eager to get the latest technology on the market even without taking into consideration the consequences.

When Henry Ford churned out the first model T for the masses, he never considered that the automobile would be instrumental in changing the world’s climate. When Mark Zuckerberg launched Facebook in 2004 and along with Twitter’s release in 2006 by Jack Dorsey, neither one of them considered that their creation would contribute to meddling in the US election process. Robotics, genetic engineering, and nanotechnology are some of the emerging technologies that could have catastrophic effect on the human race if not kept in check. But with increasing demand, profitable competition, and lack of government oversight, keeping these technologies under control will be difficult if not impossible.

This brings me to Eliot Peper’s latest addition to his Analog series, Borderless, which looks at the emerging technology of brain-computer interface, specifically neural connection with the internet. We are already addicted to the internet, and being connected 24 hours a day would leave us 100% dependent. In his first book of the series, Bandwidth, Peper delves into how this technology could be used to manipulate an individual on a grand scale. In Borderless, Peper reflects on how this technology could influence the governments of the world and the danger of creating a new world order.

Peper’s Borderless stars a delightful protagonist, an ex-CIA spy known as Diana, who unveils a government plot to take over the ‘feed’. Because of her knowledge on information only known by her, the burden of stopping this takeover is left to her. Time is of the essence which lends to a white knuckle escapade to save her lover and to protect the feed.

I applaud authors like Eliot Peper for bringing up topics about the latest and emerging technologies and giving us readers a glimpse of their potential dangerous side in such an entertaining yet thought provoking way. I give Eliot Peper a standing ovation for Borderless.

I would like to thank the author for my advance reader copy of Borderless.

To learn more about the series check out the Analog series.