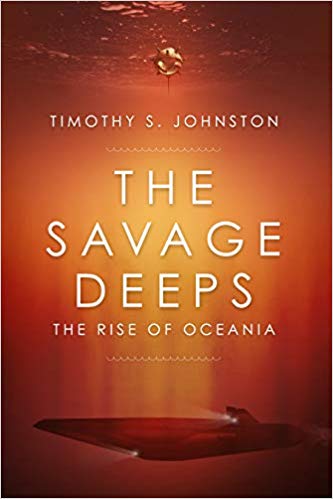 The focus of my blog is to review book series and not individual novels. But writers are going to continue writing novels within a series even after I have done my review, so I plan on reviewing the individual novels as they come into circulation.  Timothy S. Johnston has recently released book #2, The Savage Deeps, to the Rise of Oceania series.

Johnston’s series takes place a hundred and thirty years into the future, where the results of climate change have flooded most of the coastal areas of the world. The underwater world of Trieste City located off the coast of Florida is the setting for the series where Truman McClusky, a former spy, is now the mayor.  Trieste City is a colony of the United States and is used for fishing and kelp farming, and because it is unincorporated, the city’s residents are treated as subclass citizens. Most of the residents want to become independent and Truman McClusky is working on making that happen.

But independence will not be easy and it means taking on the strength of the American navy. To do so means having some advantage over the American military and the only way the Triestrians can do that is to have some kind of superior weapon. McClusky and cohorts have acquired not one, but two types of technology that could possibly give them that advantage and in The Savage Deeps, McClusky is going to prove it.

To learn more about the The Rise of Oceania series click here.