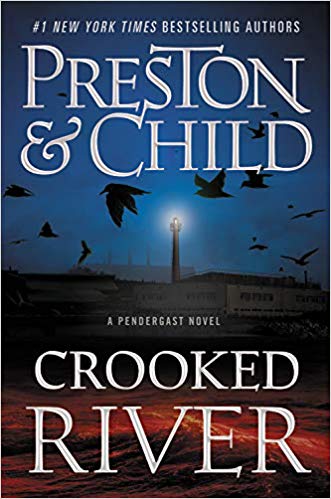 The focus of my blog is to review book series and not individual novels. But writers are going to continue writing novels within a series even after I have done my review, so I plan on reviewing the individual novels as they come into circulation.  Douglas Preston and Lincoln Child have recently released book #19, Crooked River, to the Pendergast series.

In my review of Verses of the Dead, I complained that it was not your typical Pendergast novel in that the storyline followed what would be a typical crime thriller. It didn’t have that usual larger than life scenario that I usually expect in a Pendergast novel. So as I began reading Crooked River, I thought that maybe this addition to the series would follow that same path. I can happily say I was wrong, as the ending had a spectacular outcome that could only be pulled off in a Pendergast novel.

Crooked River begins on Captiva Island located off the Gulf coast of Florida, not far from Fort Myers. Dozens of feet are found on the beach, washed ashore by the tide. A reluctant Pendergast, nudged on by his supervisor, Walter Pickett, begins the FBI’s part of the investigation on the mystery of the feet under the supervision of the Coast Guard, which is led by Commander Baugh, an overconfident and arrogant individual. Pendergast, immediately seeing that Baugh is heading in the wrong direction with his investigation, begins his own clandestine operation. This, of course, leads him to a whole-lot-of trouble.

Pendergast is also joined by his partner A.B Coldmoon, who was introduced in the previous novel, Verses for the Dead, as well as the ever intriguing Constance Green. It is Constance Green that puts on a show stopping performance at the end, not unlike her exploits that occurred in The Blue Labyrinth which established Constance as one of my favorite characters in this series.

Once again Pendergast and his cohorts gave me a delightful break from the doldrums of life. Though it would be useful to read the Verses of the Dead beforehand, Crooked River can be easily read as a standalone novel.

To learn more about the Pendergast series click here.