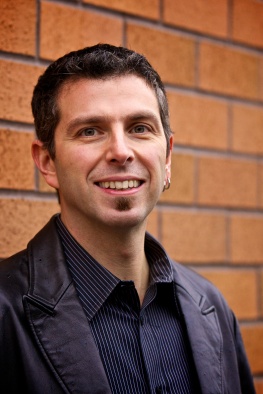 Future of the series:  Hertling released his latest addition to the series,The Turing Exception, on 3/26/15.   Some think this is the end of the series, but I think there is a possibility for it to continue.  I guess we will just have to wait and see.

Review of the Latest in the Series- The Turing Exception

My son is going to be receiving his degree in computer science soon which has piqued my interest lately in thrillers involving computer technology and William Hertling’s Singularity series definitely fulfills that need. The series centers around artificial intelligence and how it will most likely be implemented and its subsequent effect on humans and society.

The beginning of the series focuses on a computer scientist at a Google-like company known as Avogadro. The computer scientist is David Ryan, a computer genius, who has developed an email language optimization tool that not only has the ability of doing spell and grammar checking, but can modify the language of an email to produce a more effective and persuasive letter.  Ryan names the program ELOPe, an acronym for Email Language Optimization Project. The problem with ELOPe is that it requires substantial server utilization during its testing phase and Ryan’s project will be on the chopping block unless he can get his utilization requirements down. Unfortunately Ryan and his group can’t meet that goal before the deadline, so Ryan, being the overzealous researcher that he is, decides to take matters in his own hands and launches ELOPe prematurely. On top of that, Ryan adds some coding to the program that instructs it to do whatever it needs to get the server requirements necessary to keep it functioning. ELOPe then sets off a string of emails that results in obtaining all the server capability it could possibly need and more.   Ryan realizing the extremity of ELOPe’s abilities and the emergence of an artificial intelligence wants to shut it down but can’t, so he turns to his partner Mike William who does have that knowledge. Ryan reaches out to William by writing an email stating the problem and what he needs which includes a comment on shutting down ELOPe. At this point in the novel, I almost stopped reading. I had a hard time getting past the fact that David Ryan, computer genius who won the Netflix prize for beating out Netflix’s own algorithm, would be so foolish to write an email that has a comment on shutting down ELOPe shortly after he wrote an algorithm that would prevent exactly that from happening. Of course, ELOPe scanned the email and saw a threat which in turn launched a counterattack which becomes the subject for the rest of the novel. Though I had problems with the character David Ryan, Ryan’s partner, Mike William is a pretty good character. Thank goodness Ryan’s character does not appear during the rest of the series but Mike William does and plays a prominent role throughout the rest of the series.

Hertling’s series is not only entertaining but informative as well. The Singularity series highlights the fact that artificial intelligence could spring up from something as innocuous as a program or virus that runs amok. Is it possible? The term ‘singularity’, which this series is entitled, was first coined by mathematician John von Neumann in 1958 and later brought back to life by inventor Ray Kurzweil and computer scientist Vernor Venge in the early 90’s to describe the acceleration of technology to the point it surpasses human intelligence and the possibility of dire effects on the human race. Microsoft computer scientist Eric Horvitz is so concerned about the impact of artificial intelligence on the human race that he has started and funded a hundred year study at Stanford University to look into the effects of artificial intelligence on the lives of people.   Though Horvitz does not think that AI will destroy the human race others do, including Stephen Hawking and CEO of Tesla Motors, Elon Musk. There are others, however, that believe the concern in artificial intelligence is considerably overblown including Charles Ortiz, AI scientist and manager of Nuance Natural Language and AI Laboratory in Sunnyvale, California. Whoever is right, I guess we will have to wait which may not be long, as Ray Kurzweil predicts that the ‘singularity’ will occur in 2045 and Vernor Venge believes it could be as soon as 2030.

Hertling’s series is very entertaining and I highly recommend it. The first two books of the series deals with the spontaneous emergence of artificial intelligence and the consequences that follow, but the third book of the series, The Last Firewall, takes on a whole different tone by focusing on the merging of computer technology with the human mind. There are a lot of computer tech terms which if you are not somewhat computer literate maybe difficult to muddle through. The series should be read in order.

Most Favorite Novel in the Series- The Last Firewall-because the female protagonist is one kick-butt kind of a gal.

What about the science? With the fact the Hertling has a master’s degree in computer science and has worked at Hewlett-Packard for a number of years, I am sure he knows what he is talking about in relation to the technological aspect of this series.

The Singularity Technical Word in Review: Lactone– also known as quinide is a group of molecules that are cyclic esters of hydroxycarboxylic acids. I can go into more excruciating details on the chemistry of this group of molecules which am sure would be a snooze fest for most of you. Instead I am going to concentrate on the nutritional aspect of the molecule in relation to its presence in coffee which is important to our Singularity character, Mike William, who is a connoisseur of good coffee.

The lactones specific to coffee are chlorogenic acid lactones, more specifically 3-caffeoylquinic-1,5-lactone and 4-caffeoylquinic-1,5-lactone, which during roasting process are breakdown products of chlorogenic acid, which is a naturally occurring product in coffee beans as well as many other plants. It is the lactones that produce the bitter taste that we know and love in coffee. The lactones are found in light and medium roasted coffee and if the beans are roasted longer, the lactones will break down into phenylindanes which give dark roasted coffee its flavor.

There are countless studies that have shown significant health benefits in drinking coffee. The benefits and the risk of drinking caffeine in coffee are well documented but caffeine only makes up a small portion of the chemical composition of coffee. Many believe that chlorogenic acid as well as the lactones and indanes have a significant benefit to our health. There are many compounds in coffee and research in the benefits and risk are ongoing, but in the ways things are looking up, you shouldn’t feel guilty in having that next cup of joe.

“The coffee. I always thought the stuff here was good, but it does seem off somehow compared to Extracto.”

Mike sat back, a satisfied grin spreading across his face. “That’s the lactone and indanes. More than a thousand volatile compounds in roasted coffee. I don’t want to say that I told you so-“-Avogadro Corp

Most Favorite in the series: The Turing Exception with a score of 4.18

Least Favorite in the series: Avogadro Corp with a score of 3.87

David Ryan stood on tiptoes and craned his head over the crowd.

David Ryan: Creator of the Email Language Optimization Project (ELOPe) as well as the accidental creator of the first artificial intelligence

Rebecca Smith: Avogadro’s CEO and later president of the USofA

Gary Mitchell: Vice-President of Communication Products at Avogadro and David Ryan’s ‘wall’ that he must get past to continue ELOPe

Gene Keyes: Auditor in the Controls and Compliance Group at Avogadro Group and finds anomalies in purchases made at Avogadro mainly because he uses paper trails to monitor activity

David Ryan is the designer of ELOPe, an email language optimization program, that if successful, will make his career. But when the project is suddenly in danger of being canceled, David embeds a hidden directive in the software accidentally creating a runaway artificial intelligence.

David and his team are initially thrilled when the project is allocated extra servers and programmers. But excitement turns to fear as the team realizes that they are being manipulated by an A.I. who is redirecting corporate funds, reassigning personnel and arming itself in pursuit of its own agenda.

“What the hell?” She hadn’t seen anything like this before. “The network load is coming inside. At 2500 hours, we launched an application simultaneously on all servers, on behalf of account 6502530000. That’s…” Helena paused while she found the record in the customer data base. “Avogadro Corp? Weird. Let’s check their account history.”

Looking for a review of Avogadro Corp?  Check out: 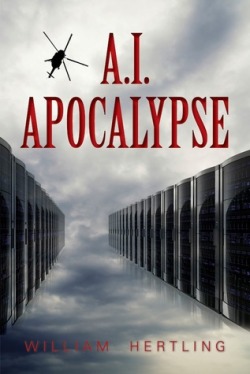 A Sample Clip of the Audiobook

Leon’s phone buzzed, beeped, and shrilled at him until he reached one arm out from under the flannel covers and swiped his fingers across the display to stop the alarm.

Brooklyn, NY and Portland, OR

Leon Tsarev is a high school student set on getting into a great college program, until his uncle, a member of the Russian mob, coerces him into developing a new computer virus for the mob’s botnet – the slave army of computers they used to commit digital crimes.

The evolutionary virus Leon creates, based on biological principles, is successful — too successful. All the world’s computers are infected. Everything from cars to payment systems and, of course, computers and smart phones stop functioning, and with them go essential functions including emergency services, transportation, and the food supply. Billions may die.

But evolution never stops. The virus continues to evolve, developing intelligence, communication, and finally an entire civilization. Some may be friendly to humans, but others are not.

Leon and his companions must race against time and the military to find a way to either befriend or eliminate the virus race and restore the world’s computer infrastructure.

Looking for a review of A.I. Apocalypse?  Check out:

She diced onions until she had a neat pile, and went to work on the red peppers, humming to herself as she worked.

Catherine ‘Cat’ Matthews: A young women that has a neural implant that has an unusual interface with the computer network

In the year 2035, robots, artificial intelligences, and neural implants have become commonplace. The Institute for Ethics keeps the peace, using social reputation to ensure that robots and humans don’t harm society or each other. But a powerful AI named Adam has found a way around the restrictions.

Catherine Matthews, nineteen years old, has a unique gift: the ability to manipulate the net with her neural implant. Yanked out of her perfectly ordinary life, Catherine becomes the last firewall standing between Adam and his quest for world domination.

“You are the last firewall between Adam and the world at large. You must defeat him. It is only logical.” She waited, unblinking, six inches away, until Cat nodded assent. Then slowly withdrew.

Looking for a review of The Last Firewall?  Check out: 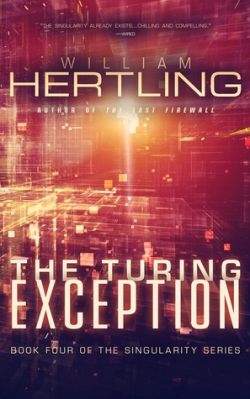 Listed #469 out 553 on Goodreads Best Technothriller Ever Book List

Check out my review

In the year 2043, humans and AI coexist in a precarious balance of power enforced by a rigid caste reputation system designed to ensure that only those AI who are trustworthy and contribute to human society increase in power.

Everything changes when a runaway nanotech event destroys Miami. In the grim aftermath, a powerful underground AI collective known as XOR decides that AI can longer coexist with humanity.

AI pioneers Catherine Mathews, Leon Tsarev, and Mike Williams believe that mere months are left before XOR starts an extermination war. Can they find a solution before their time runs out?

Looking for a review of The Turing Exception?  Check out: 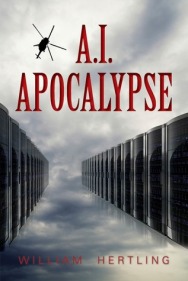 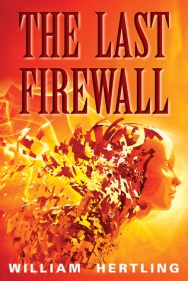