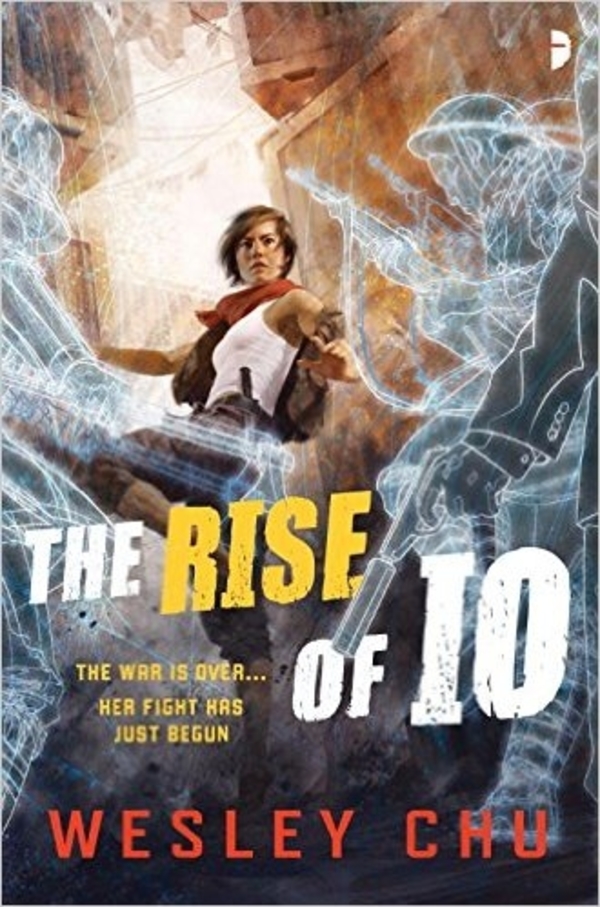 The focus of my blog is to review book series and not individual novels. But writers are going to continue writing novels within a series even after I have done my review, so I plan on reviewing the individual novels as they come into circulation.   Wesley Chu has just recently added book #4, The Rise of Io to the World of Tao series and the first of a trilogy.

You may think that it’s your guilty conscience that tells you not to eat that second doughnut for breakfast, but you may be wrong. According to Wesley Chu, that little voice in your head may actually be an alien just giving you advice.

Wesley Chu has written a very entertaining and award winning sci-fi thriller series that features Tao, a member of an alien race known as the Quasing. To give you a synopsis of the series, the Quasing’s ship crashed on Earth millions of years ago and in order to survive, they needed to occupy a living host. At first it was animals, but eventually they merged with humans and their presence had a substantial influence on mankind’s history. Tao had many hosts throughout history including Genghis Khan, but eventually he became disillusioned with the Quasing exploiting humans to assist them in reaching their ultimate goal, which was to build a ship and get back with their own kind. Up to this point the Quasing believed that human conflict resulted in a rapid increase in innovation which would help the Quasing reach their goal more quickly, but Tao resisted that idea and his feelings were shared by a number of other Quasing. Since not all Quasing had the same opinion it ultimately lead to war with the formation of two Quasing factions, the Prophus (the peace-loving Quasing) and the Genjix (the war-loving Quasing) with humans caught in the middle.

For the first novels in the series, the focus is on Tao and Tao’s host, IT technician, Roen Tan and later Roen’s son Cameron. In The Rise of Io, the spotlight is now on the Quasing Io and her newly acquired host Ella Patel. Io becomes one with Patel when a fight with Genjix operatives kills her host. Patel, a small scrappy Indian women, happens to be in the vicinity when Io is looking for a host and gets the privilege, or more rightly, the misfortune of becoming her host. Patel is not at all happy that this alien has decided to become part of her life, but since she has no recourse in getting rid of the alien unless she dies, she tries to make the best of it. Io is a Quasing that hasn’t quite accepted her fate of having to survive on planet Earth and her relationships with humans has been difficult. However, Patel may be exactly what she needs.

The Rise of Io is a must read for Tao fans, as there is plenty of action as well as a few chuckles. For those that are new to the series, I must warn you, you will need to take some vacation time because you won’t be able to wait until you can read the rest of the series. Though The Rise of Io can be read as a standalone, I would strongly suggest reading at least the Rebirths of Tao and The Days of Tao before reading The Rise of Io, as it gives more background on the motives behind some of the characters and makes reading The Rise of Io more rewarding.

So next time you grab for that jelly roll and you hear that little voice in your head just say, “Take a hike alien.”

I would like to thank NetGalley and Angry Robots for my Advance Reader Copy of The Rise of Io.

To learn more about the series check out Wesley Chu’s The World of Tao series.