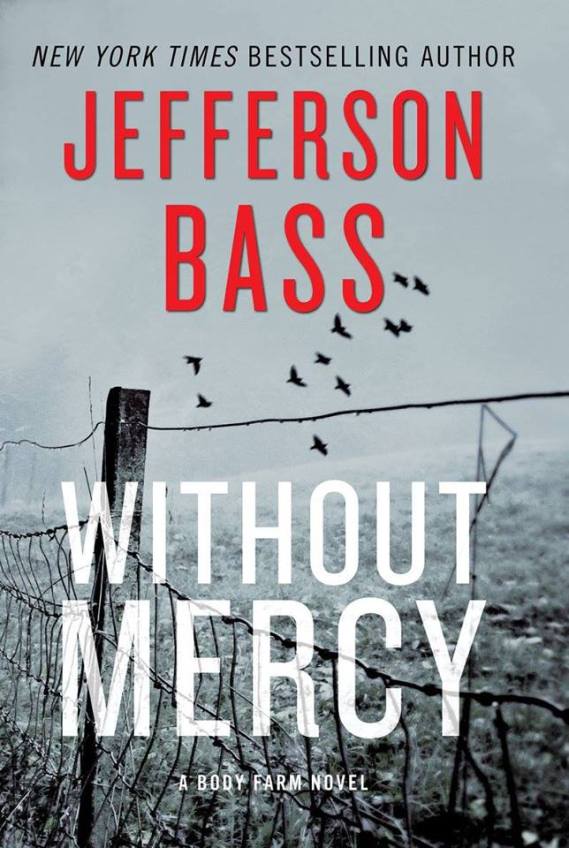 The focus of my blog is to review book series and not individual novels. But writers are going to continue writing novels within a series even after I have done my review, so I plan on reviewing the individual novels as they come into circulation.   Jefferson Bass has just recently added book #10, Without Mercy to the Body Farm series.

The last two books of the Body Farm series, Cut to the Bone and Breaking Point, were both prequels which occurred in the early days during the formation of the body farm. For the latest release, Without Mercy, the backdrop has zipped forward to present day after the events that took place in the Inquisitor’s Key.  Dr. Bill Brockton is investigating a murder that may be a potential hate crime when he gets word that the notorious serial killer, Nick Satterfield, has escaped from prison and Brockton is on top of his hit list. For fans of the series, you will recognize Satterfield from Cut to the Bone. You would think that having an insane psychopath biting at your heals would be enough for Brockton, but he is also has to deal with his long time Ph.D. student, Miranda Lovelady, preparing to leave the coop on to bigger and better things, something that he doesn’t want to happen. Lovelady’s impending departure also results in Brockton’s reflection of his solitary life-style as well as his perception of his own inadequacies in the latest state of the art and complicated research in forensic science.

The Body Farm series is probably my favorite forensic thriller series, as the forensics is cutting-edge and you know the science is accurate as one of the coauthors is William Bass, the original founder of the nonfictional Body Farm. Once again, Bass entertains and educates at the same time in Without Mercy. Jefferson Bass also brings to light the increasing issue of hate crimes directed toward Muslims and other minority groups.

Though technically this could be read as a standalone, there are a number of references to previous novels especially Cut to the Bone which I recommend reading beforehand.

To learn more about the series check out Jefferson Bass’ Body Farm series.