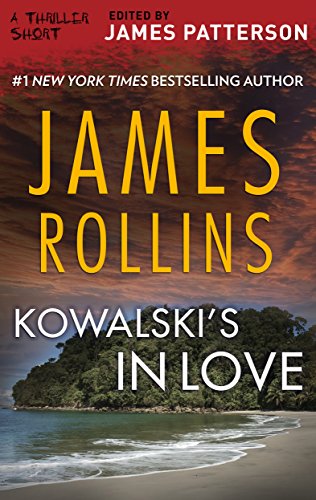 The focus of my blog is to review book series and not individual novels. But writers are going to continue writing novels within a series even after I have done my review, so I plan on reviewing the individual novels as they come into circulation.  James Rollins has recently released a short story, Kowalski’s In Love, from the Sigma Force series.

Joe Kowalski first joined the Sigma Force gang in the fourth book of the series, The Judas Strain, and has been a permanent feature ever since. Kowalski is the munition expert for Sigma Force and he stands out from the rest in that he is more brawn than brains. So you may wonder, ‘how on earth did Painter Crowe choose Kowalski to become a member of this highly specialized team?’ You can find the answer in Kowalski’s in Love.

Kowalski’s in Love first appeared in James Patterson’s Thriller: Stories to keep you up all night, an anthology of short stories, however, Rollins has recently released it separate from the anthology. The story starts off with, “He wasn’t much to look at…even swinging upside down from a hog snare”, which should give you some idea of where this is going. For Kowalski fans this is an absolute must read. It is short but sweet.

To learn more about the series check out the Sigma Force series.

2 thoughts on “Review of James Rollins’ Novella, Kowalski’s in Love”