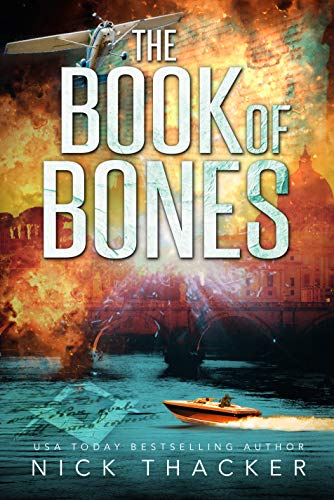 Harvey ‘Ben’ Bennett lived the quiet life as a forest ranger until tragedy struck. Now he lives the life of an exciting operative and head of the Civilian Special Operations going from one adventure to the next. Nick Thacker has released today the next thrilling episode in the Harvey Bennett series, The Book of Bones.

THE SONS OF GOD ONCE WALKED AMONG US
A dark thread runs through the history of humanity, and it will change everything.

“They were on the earth in those days—and also afterward—when the sons of God went to the daughters of humans and had children by them. They were the heroes of old, men of renown…”—Genesis 6:4

When Harvey Bennett’s friend is taken hostage, Harvey’s mission appears to be simple:

Find the Book of Bones—a lost dialog of Plato that details the rise and fall of the Atlantean civilization.

But Harvey is not the only one looking for this lost and ancient tome. Powerful forces want it for their own dark purpose, and for the terrifying secret it contains—a truth hidden for centuries, and one that will change everything we know about human history.

HARVEY BENNETT IS ABOUT TO UNRAVEL THE MYSTERY OF THE BOOK OF BONES. AND THE TRUTH MAY KILL HIM.