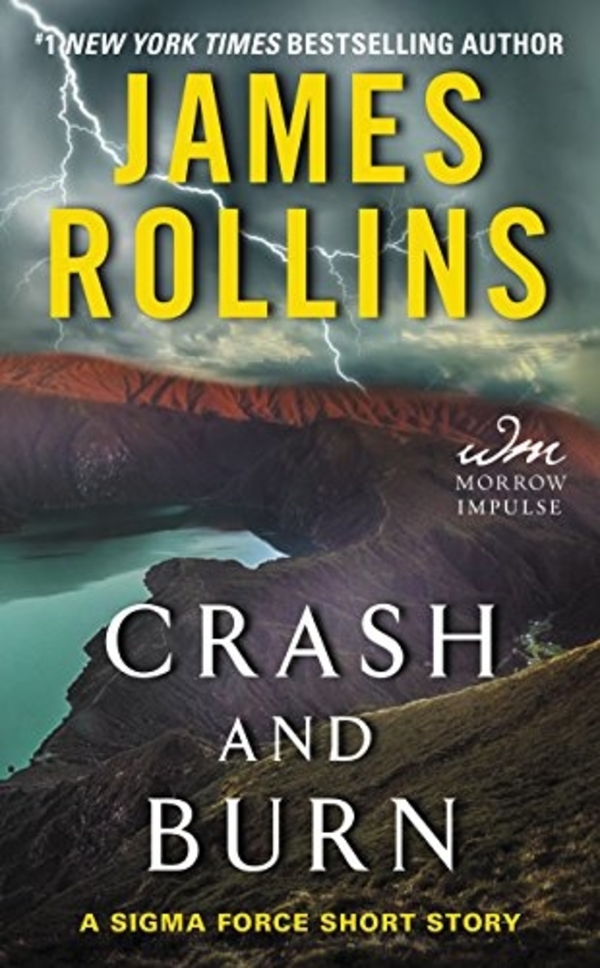 The focus of my blog is to review book series and not individual novels, but writers are going to continue writing novels within a series even after I have done my review, so I plan on reviewing the individual novels as they come into circulation.   James Rollins just recently added book #11.5, a novella, entitled Crash and Burn, to the Sigma Force series.

Crash and Burn is…well…umm…short. I know. I know. It is a novella, so I should expect it to be short, but even though there was plenty of action which one expects from a James Rollins book, it seems to end even before it got started. I almost got the feeling that this was a scene that Rollins really liked, but couldn’t figure out how to place it in one of his novels. Rollins puts two divergent characters, Seichan and Joe Kowalski, together in an unplanned mission where both are dependent on the other to not only to save themselves, but to thwart a group of evil madmen from developing and using a rather disturbing piece of technology.

Rollins had a great opportunity to have some entertaining bantering between Seichan and Kowalski, and even though there was some of that, I really feel that opportunity was lost. The interactions between these two could have made Crash and Burn a real page-turner, but instead it is a rather ho-hum adventure which leads me to gripe about the marketing of novellas by well-known authors.

What I have noticed in recent years is that authors of best-selling novels often release short stories not long before they plan to release their main novel. This is obviously a marketing ploy to get readers interested in the upcoming novel, but it is also a way to make money on what is usually a substandard piece of literature. Granted, the cost to buy a short story may be as low as 99₵ for an e-book as is the case for Crash and Burn, but I have seen the cost as high as a couple of dollars for something that should be available for free on an author’s website. I feel that readers are unknowingly being duped into paying for advertisement for their upcoming next best-seller. One of the most egregious recent examples of this marketing ploy is Kathy Reich’s release of The Bone Collection, which is a collection of four novellas, three of them have been previously released with only one of them being new material. The cost of The Bone Collection is $9.99 for a copy of the e-book, so readers that have read the previous novellas must spend what I think is a whole lot of money for the only short story that is new. I love Kathy Reichs and James Rollins and I will undoubtedly be reading their next releases, but this type of marketing ploy must stop. My advice to the authors, be good to your loyal fans and not take advantage of them, and I can guarantee you, they will reward you in kind.

To learn more about the series check out James Rollins’ Sigma Force series.