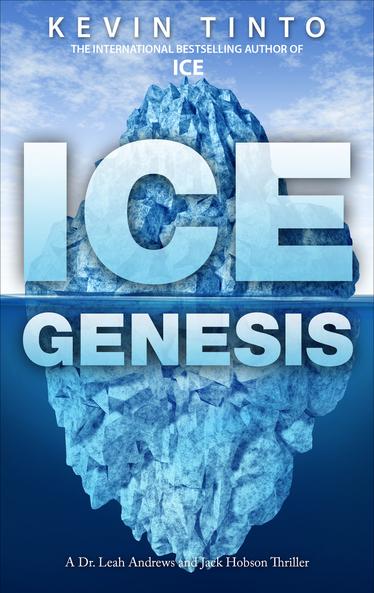 Kevin Tinto has released today Ice Genesis, the much anticipated sequel to his award winning Ice from the Dr. Leah Andrew and Jack Hobson series. Ice Genesis is the second in a three part series with the third book in the series, Ice Revelation, having an expected release date sometime in the Fall of 2018.

The Americans and Russians are racing toward nuclear confrontation over a mind-blowing find under the ice in Antarctica. The American Executive Branch is in meltdown over the President’s order to detonate a highly classified Iso-Hafnium nuclear device in Antarctica, killing a platoon of Navy SEALs and the same number of Russian Special Operation, Spetnaz.

Dr. Leah Andrews and Jack Hobson, having escaped the President’s plan to eliminate them have the upper hand, thanks to a nuclear device hidden in the New Mexico desert. This leverage will only last so long, and the key to unlocking the mystery lies with twenty-eight Native American, cliff dwellers, who survived more than eight-hundred years, under the ICE in stasis.

While Leah tries to untangle the mysteries of the ‘Ancients’, Jack Hobson is trying to protect Leah, and the Ancients, while finding himself drawn into another mystery; is there more of these high technology caches? If so, how will they secure them

before other interested parties, including the Russians locate them?

The key to the mystery, as Leah learns, is one of the Ancients. A Lakota Shaman, named Appanoose. He has no interest in cooperating with Leah; just as she learns stunning new facts about the Ancients and what happened to them more than eight-hundred years ago.

Leah and Jack find themselves the targets of not only the US government, but foreign powers and even the Ancients themselves, in the thrilling follow-up to the bestselling debut: ICE!

Available on e-book (paperback to be released in 2 weeks)