The focus of my blog is to review book series and not individual novels. But writers are going to continue writing novels within a series even after I have done my review, so I plan on reviewing the individual novels as they come into circulation.  R.J. Corgan has recently released book #2, Meerkat Murders, to the Kea Wright series.

Did you know that the cute and cuddly meerkat, made famous by the Disney movie The Lion King is the most murderous mammal known to science?  A 2016 study published in the journal Nature found that Suricata suricatta, also known as meerkats, beat out 1,023 other mammals at being the most murderous. They found that approximately 20% of all meerkats will be killed by one of their own. Sounds like a good topic for a good murder mystery, eh? Well, R.J. Corgan does just that with his latest addition to the Kea Wright series, Meerkat Murders.

So, is the Meerkat Murders about a murderous band of meerkats? Well, yes and no. Yes, meerkats are murdered, but the real focus of the novel is not the murders of Suricata suricatta, but that of Homo sapiens. After the excitement that geologist Kea Wright experienced in the first book of the series, Cold Flood, she takes a trip to Botswana to visit an old friend, Tamaya, who is a biologist studying the meerkat population of the Kalahari Desert. It is not to long after Wright’s arrival that Tamaya’s husband is fatally bitten by a spider. The circumstances behind his death seemed rather suspicious which raised Wright’s sleuthing radar. It’s not long until another death takes place and Kea is now all gung-ho to find out who done it.

This is more like a cozy murder mystery than a thriller, though there is some action, it is not quite the constant action packed thrills you would expect in a good thriller. Overall this is an enjoyable read with one exception, Wright’s methodology of interrogation of potential perpetrators is rather accusatory without having any real proof, which makes for some rather cringe worthy moments.  Also, Corgan began his series with a geological slant to it and I thought that would continue, but in the Meerkat Murders there wasn’t really much geology at all. There is, however, some interesting information on the lives of the adorable meerkat and that alone makes it all worthwhile. 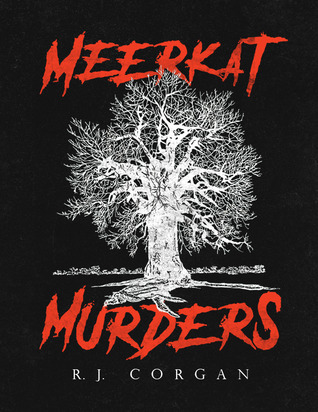 To learn more about the series check out the Kea Wright series.