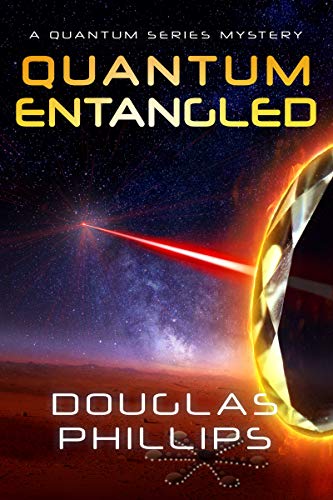 One doesn’t usually expect to hear quantum physics and thriller being said in the same phrase, but author Douglas Phillips takes the strange and esoteric subject of quantum theory and has created a first rate thriller series. Phillips’ series begins with the two main characters of the series, Daniel Rice, a government science investigator, and a feisty Haitian beauty who also happens to be a particle physicist, Nala Pasquier, investigating the disappearance of a Russian space capsule as it reenters the Earth’s atmosphere. What happens will make quantum physics a household name. Philips’ has just released the fourth novel from his Quantum series, Quantum Entangled.

Daniel Rice hasn’t felt right since his jump to the future months ago. Curious dreams repeat with detailed precision. A voice – or something – seems to be calling him. His problem isn’t medical, it’s not even scientific, and it’s driving his wife crazy. Nala is worried, and she’s not the type to dawdle. Soon they are halfway around the world to connect with the one person who might help – alien android, Aastazin. Zin’s no doctor but he has friends in high places. Very high.

Next stop, a thousand light years from home and a six-petal megacity where species from dozens of worlds mingle. As Daniel seeks help for his personal problem, he learns there is more going on at this alien gathering place – aggressive security bots, an ancient mystery, and a pending vote that could shun humanity from the greatest collection of civilizations the galaxy has ever known.

Available on Ebook and paperback